I’m sure I’m going to get a message from my mum saying my last blog-post was naughty and I should not be flashing around ‘the puppies’.


However while I’m likely to be in trouble I may as well throw another sexual contemplation into the mix: this time about tortoises.


Have you even wondered how tortoises, and for that matter turtles, have sex?  In the ordinary course of life why would you wonder?  But think about it.  They are both covered with an extensive and hard shell.  They don’t look at all flexible.  And the phrase “pull your head in”, as advice one should stop speaking or make oneself scarce, suggests tortoises and turtles are quick to withdraw.  Subliminally perhaps I presumed they were frigid; asexual; or hermaphroditic.  I knew they lay eggs because in travels I’ve seen them.  Or maybe I learnt it at school.  But beyond reading about Darwin and the Galapagos, I haven’t given these animals much thought.


Well, except for the time I found a large turtle on an island in the Pacific, turned upside down outside a beach restaurant hut with its little legs flailing in the air like a wounded cockroach.  I was as distressed to see this turtle’s disempowerment as I was to see the sandwich board emblazoned with “Lunch Special: Turtle Soup”.  So I waited under a nearby tree and when the guy having a smoko out the back disappeared inside, I turned the turtle up the right way (with some difficulty ‘cause he was heavy!) and shooed him along back down to the sea.  He’d nearly made the great escape when the guys spotted us and came running.  The turtle ran one way, I ran the other, and as far as I know they had to change the lunch menu.


Ever since then I’ve had a quiet kinship with ‘Free Willy’ but failed to learn more.  Until, that is, I found three pairs of tortoises mating in a few days ago.  The first pair were in the ruins of Hadrian’s Library, and I think they had the sweetest relationship.  The second were in the Roman Agora and though she was definitely playing hard to get with respect to the wild thing she seemed to like his kisses.  And the third pair were in the grounds of the Ancient Agora, behind the spectacular (still largely in tact from the 5th century BC).  This third mating ritual was positively rough.  He clearly did not appreciate ‘no means no’.


My sailing buddy Emma and I felt protective of this female, distressed even, as the male tortoise bashed into his ‘mate’ from every angle like he was a front-row forward.  She turned every which way to avoid him, at times moving concentrically like a top, but still he dived repeatedly for her rear.  When he caught her top end, instead of kissing or nuzzling (as the other pairs were doing) he seemed to bite and head-bang her.  No matter how far she retreated, he would not quit.  It took all our powers of self-possession not to pick her up and run away.  He deserved to be ditched.


By contrast the other pairs were gallant.  A little courting accompanied by gentle foreplay, before the male caught her off-guard and climbed on top just as any animal would from behind.  But here’s where it got confusing.  How the hell was this position going to work?  I mean don’t you need skin on skin, soft bits on soft bits?  Hmmm.


The first time the pairs mounted, the female managed to wriggle and push the guys away.  They seemed to be saying “not in front of the tourists darling”… or “go away I’ve got a headache”.  Or perhaps “oh for goodness sake aren’t you tired yet?”  Whatever, two of the chaps were sufficiently evolved to bide their time with a little more flattery and nuzzling, before attempting to climb back up again.  I did admire the gal who really made him work for it – go girl! – but when the other lass relented she seemed sanguine which was nice.


The rough-guy tortoise in the Ancient Agora, however, bore no such refusal.  And the second he mounted the noises began.  We wondered, or hoped, it was the female getting some enjoyment.  But as their heads by then were shielded by a bush we couldn’t be sure.  On and on the noises went – a cross between a strangled sigh and an airy pumping noise – until we decided it was probably the man being selfish and we’d better leave them to it.


It wasn’t until I got back to that I discussed the question of Tortoise Sex with my friend Grant who immediately found an interesting blog called 'How Animals Do It'.  http://howanimalsdoit.com/2011/10/23/how-turtles-do-it/
Talk about laugh.  For though the blog’s video is of giant turtles, and we observed small tortoises, the principal is the same: the guy has a penis like a rear extendable hook, able to curve under the female’s shell and attach with the force of a powerful suction cup.  It is reproductively effective but far from pretty.


Also gross, but interesting, is that tortoises and turtles have only one hole for all bodily functions – an opening used for number 1s, numbers 2s, sex, reproduction and, wait for it, respiration under water!  The name of this ‘super organ’ is the same for males and females: a cloaca.  And it is out of the male cloaca that the penis emerges.


That’s certainly taught me something.  And though I’ve never been a fan of the ‘c’ word - due to the derogatory and misogynistic slang representation of female genitalia - I like this trans-gender and scientifically correct ‘c’ word.


I reckon, too, that you’ve got to give the male tortoise some acknowledgement for having a cloaca which at least goes some way towards being multi-faceted.  For in most species a bloke's sexual apparatus lags far behind in terms of a woman’s creativity, complexity and sensual colour.


So, perhaps those female tortoises were getting their rocks off after all?! 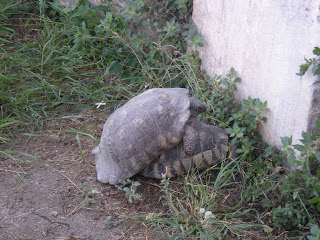 TO KISS OR NOT TO KISS

Out now on Amazon!

The True Art of Project Management

For a guest blog on the art of project management by Julie Mullins go to: